Though it’s been half the year the duo Anand Ahuja and Sonam Kapoor wedding is still talk of the town in Bollywood. The couple tied the knot on May 8th held at Bandstand, Bandra. Sonam Kapoor wedding dress has ruled all our Instagram pages till date, there is no doubt that she is well known as a fashion icon in the industry, she just stunned the crowd with her unique choice of wedding attire. Come let’s see them one by one.

In this article, we have listed the hand-picked collection of Sonam Kapoor wedding dresses, the designer and cost of the attires in detail. Hope this article will make your day to the fullest.

The wedding starts with a Mehendi ceremony where the couple opts for a simple outfit. To match with her finace Anand who was dressed up in a salmon pink kurta, Sonam Kapoor picked an off-white sleeveless kameez with coral shade dupatta. The lehenga was designed with heavy gold gota work which gives traditional touch to the modern outfit. 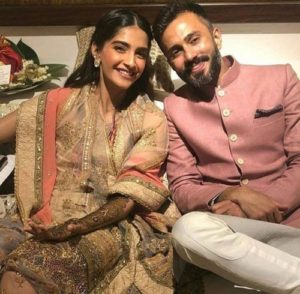 Sonam Kapoor opts to choose for an AbuJani Sandeep Khosla attire for her sangeet ceremony in an ivory lehenga choli. She complimented the outfit with the heavy kundan choker set, maang teeka, and heavy jhumkas. The choli has been designed with intricate detailing of gold and glass work which embellish the outfit. The entire lehenga skirt has multiple motifs of design embedded in it.

It is stated that Sonam Kapoor ordered this Sangeet lehenga choli 2 years ago and it took 18 months to design this outfit by Abu Jani Sandeep Khosla.

On the big day, the bride Sonam Kapoor made an ethereal look on her wedding in the bright magenta color lehenga designed with gold embellishments. This bridal lehenga in magenta colour was designed by Anuradha Vakil Creation. Sonam Kapoor carried herself gracefully in this heavy designer lehenga with the vintage style jewellery sets- a neckline choker with multi-stranded matha Patti completed her bridal look.

Though we are unaware of Sonam Kapoor wedding dress price, some reports have cited that the outfit may worth between Rs 70 lakh to Rs 90 lakh.

Post, all the formal rituals the bride opted for a funky Anamika Khanna ensemble. Though the grey shade lehenga was simple, it stands on its own style on her. The bridal makeup look at reception was different from other occasions like bright red lipstick and dramatic eyes. The outfit is complement with the layered necklace with straight ironed hair.

It is also stated that there was a mix of opinion on Sonam Kapoor reception lehenga as many were expecting more from the trendsetter and she should have chosen something different and unique. On the other hand, somewhere really delightful in the color choice of grey and off-white lehenga outfit with a chevron printed skirt. 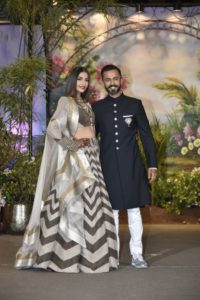 According, to reports, Sonam Kapoor’s wedding ring costs around 90 Lakhs added to it, she herself designed her mangalsutra with two of their star signs embed in it.