The Thaali is one of the most sacred customs of a Hindu wedding. While we call it the ‘Thirumangalyam’ in South India, it is known as the Mangalsutra in the North. Unlike other ornaments, thaali is of great ceremonial significance. The holy thread symbolizes the real meaning of a Hindu marriage. 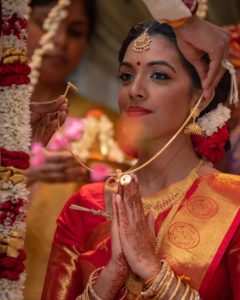 So what does the thaali stand for? The Thirumangalyam is a mark of love, respect, and dignity and is presented to the wife by her husband at the auspicious hour of the marriage day. But do we know where this thaali custom originated? Let’s take a look.

In the 11th century, the poet Katchiyappa Sivachariar mentioned thaali for the first time in his book Kanthapuram! Later, in 12th-century poetry, Seikizhar and Kamban mentioned about thirumangalyam in the historical book Periyapuranam. Since then, the thaali ceremony was believed to have come into practice.

In North India, the Mangalsutra is in the form of a black and gold beaded necklace. Do you see this gold part of the chain? This represents Goddess Parvati, and the black beads symbolize Lord Shiva. 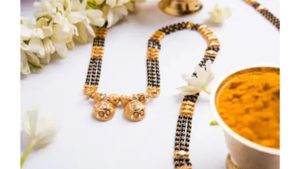 Before this tradition started, women wore a kungumam on their forehead and men wore rings on the toe. 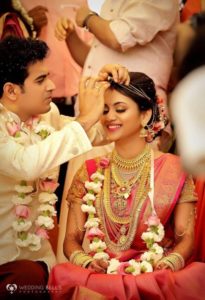 In early times, thaali was worn only by Hindus and later converted Christians started wearing thaali. It is also believed that thaali depicts the union of the husband and the wife and also protects them from evil. Thaali is generally worn with a gold chain commonly known as saradu or “manja kayiru” 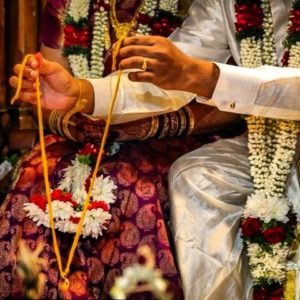 In most circumstance, the thaali is brought from the groom’s side. Now let’s take a look at the different elements of the Thaali and what they mean! As per the customs, the thaali includes gold coins, gold roundels, corals, and bottu.

They may also include motifs like the moon, sun, Shiva lingam, Goddess Meenakshi, Thulasi, etc. as part of the design.

If you’re wondering how heavy it is, a thaali generally, thaali weighs between 4 to 8 grams which are made of 22 karats or 18 karat gold.

So what do people who cannot afford gold do? In such cases, the groom ties a  turmeric thaali which is tied to the Manja Kayiru and considered as a Thirumangalyam.

The irony is that the mangalyam should be worn in such a way that it should not be visible.

You may also like: Different Marriage Customs in India- All Culture and Religions 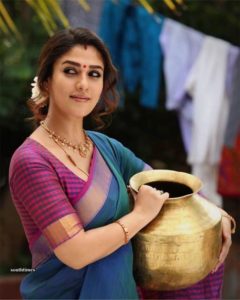 India is a land of diversity and this is very true in the case of the Thaali designs as well! Let’s take a look at the varied Thaali designs from region to region.

Bottu Thaali- As you can see, the circular shaped gold design resembles the bindi placed in the forehead, giving it it’s name. This type of thaali is worn in Andhra Pradesh, along with coral and black beads. 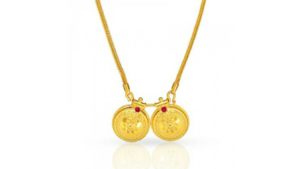 Shivlinga Thaali- The worshippers of Lord Shiva, commonly known as Iyers, wore this type of thaali. 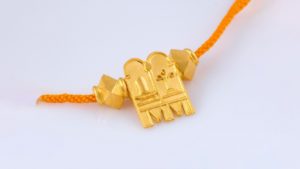 Thenkalai Namam Symbol Thaali- Iyengars, the worshipers of Lord Vishnu, wore this as Tamil was very important to them. The thaali has a Vishnu design embedded with a “W” cut in the bottom.

Annalakshmi Thaali is a grand Lakshmi thaali with parrots or peacock design border. This type of thaali is worn in Sivagangai, Madurai, Theni districts of Tamil Nadu. 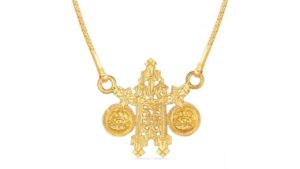 Vadakalai Namam Thaali with Conch & Chakra- Worshipers of Lord Vishnu with Sudarshan Chakra. This Mangalyam design has Conch and Chakra with two “M” cut in the thaali.

Nagarathar Thaali- Take a look at this grand ornament. This Kalatheru is the most elaborate, with 34 pieces of gold. 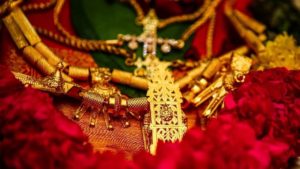 Added on to it, the thaali also varies based on the community and region. For say, Sokar Meenakshi set comes with thaali, two pieces of pavalam, two plain kulaai and two pieces of Lakshmi kasu. 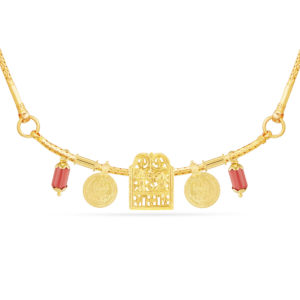 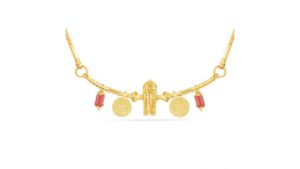 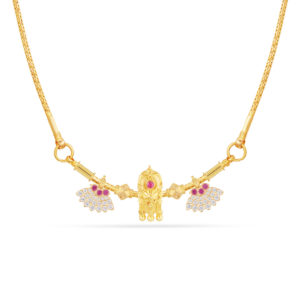 And if you’re wondering if we left out any, here’s a list for you! 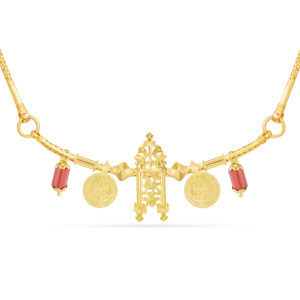 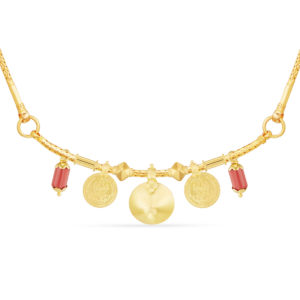 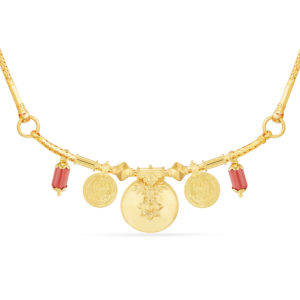 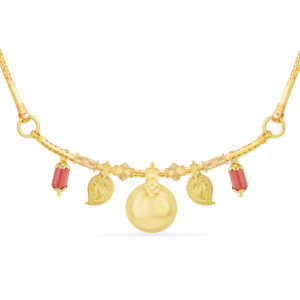 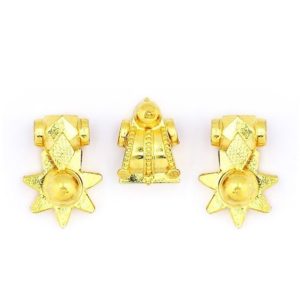 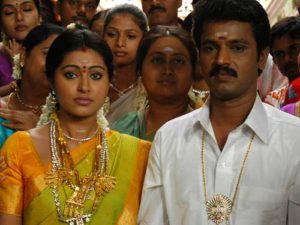 Here’s an interesting twist to the tradition.  The traditional thirumangalyam did not have stones studded in it, but now young brides are opting for diamond studded thaali for their wedding. This is in line with the changing social norm surrounding the wearing of thaali.

Oh, and here’s an answer to the question we’ve all asked at some point. What is significance of tying 3 knots in Tamil marriage? 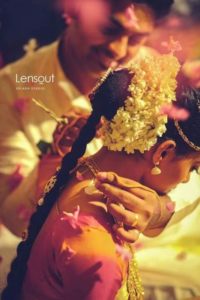 The first knot symbolizes “Urimai” known as power a husband gives his wife.

The second knot resembles “ Uravu” which strengthens the relationship of the bride’s and groom’s family.

The third knot symbolizes the society-that the brides are an important member of the groom’s family.

The meaning of these three knots differs from state to state. In Tamil Nadu, each knot has a unique meaning. Let me explain it in Tamil to make it more meaning full.

After 3 months of the marriage, the yellow knot “Manja Kayiru” is changed to the gold chain. This festivity is called the “Thaali pirichu korkum” ceremony. 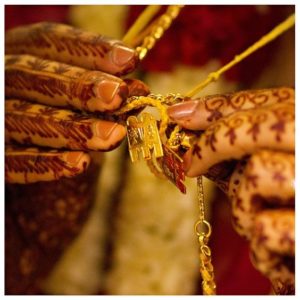 In this ceremony, the elderly family members do rituals and change the thaali from yellow knot to gold saradu.

In some communities, they don’t tie the thaali in the wedding, and instead, the groom puts a gold chain on the bride’s neck. There are different types of thaali saradu which also differs based on the community. Some of the saradu collections are listed here… 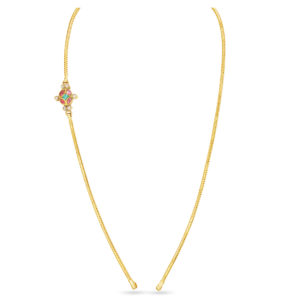 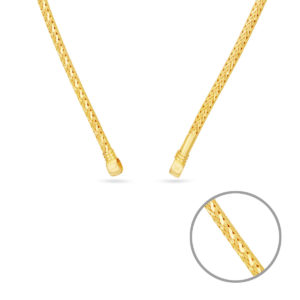 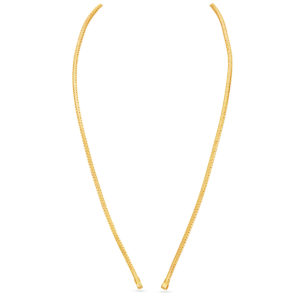 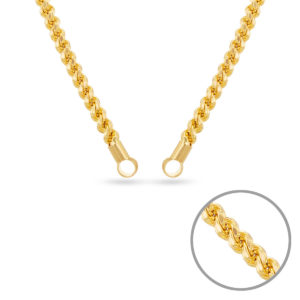 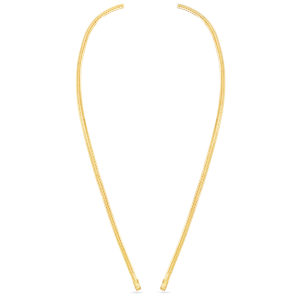 In recent times, women wear mugapu with the thaali saradu. 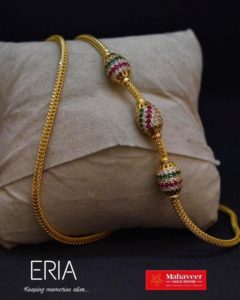 Did you know that the Thaali has health benefits too?

Thaali is believed to regularize a women’s blood circulation and control the pressure level.

It is also stated that when gold comes in direct contact with the skin, the medicinal benefits occur.

In the present time, wearing of thirumangalyam has eventually reduced.

Modernization has caused many women to not wear it on a daily basis, and for some, it is more of a fashion statement than a symbol of marriage.

However, it is impossible to deny its power and importance even today, and the Thaali still remains the most sacred ritual in a Hindu wedding.