The migration of fashion from ancient times to today is just adorable. From M.S.Subalakshmibulakshmi to Nayanthara Tamil Film Industry has its unique style for decades. In this article, we would see the fashion and makeup from the 1930s to till date. Get explored to the dramatic change of fashion in the Kollywood film industry in an undreamable path.

The 1930s are the times when fashion evolution started carving its own path in South India.

Whitestone jewellery was the most preferred type of accessory in Black and white movie as it enhanced the look.

Take a look from top to bottom from – from the nethi chutti to the heavy anklets.

Most of the heroines preferred tilak shaped bindi and Nath which gave a classic look.

Curly hair was the most preferred hairstyle compared to straight hair.

When it came to the 1940s, in fashion and makeup, the first thing that comes to our mind is the optimistic look of the heroine.

The circle thin eyebrows with minimal eyeshadow were the most preferred style.

Have a look at the actresses Anjali Devi and Bhanumathi who have carried themselves in a graceful way. 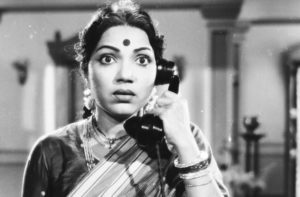 The Late 1940s were the times when wing eyeliner came into existence.

Heavy zari saree with whitestone jewellery are the highlights of these times.

As most of the movies were historically based movies, the head crowns and veils were given more importance.

Take, for example, the dressing of actress Anjali Devi in the movie Mangaiyarkarasi in which she wore a heavy zari saree with puff sleeves and whitestone jewellery sets.

This trend was followed in the 1950s with some minimal change. 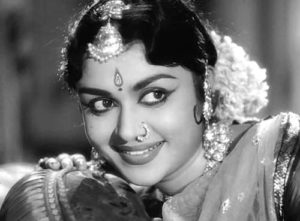 The 1950s are the times when accentuated lashes, rounded brows, and lightly lined came into existence.

Most of the heroines were of a curvy physique, which was preferred to the slim physique.

The 1950s was the decade which did not have physique constraint. 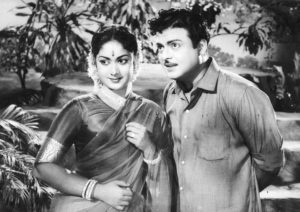 The makeup and attire worn in this time were very simple, and this helped the audience to consider them a part of the family.

One best example is actress Savitri, with her looks in the movie Pasamalar, which was simple with a bare lip shade and wispy braids. 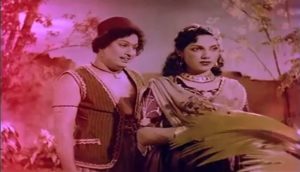 This decade was very notable as this was the era when the first Tamil color movie was released (Alibabavum 40 Thirudargalum).

From then on, the view on fashion and choice of color has changed a lot.

The 1960s opted for a bold look with darker wings and sheer peachy blushes.

Thickly penciled bold wings are the signature features of the 60s – which is followed even today. 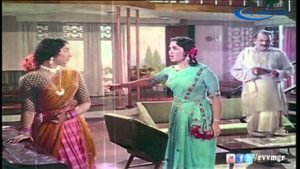 Can you imagine the two sided-plaits for a saree? Yes, this was the trending style in those days!!!

Other than this, high tight buns were the most preferred hairstyle, decorated with embellishing flowers like crossandra and jasmine.

Heavy Jhumkas with ear chain and matching traditional attigai jewellery were the desired fashion icon of those eras.

Round bindis and embroidery sarees came into the trend in these times.

Western dresses like skirts and gowns gained prominence in this time period.

You can see the style of Saroja Devi in the movie Anbe Vaa, in which she has given fashion goals to many young girls of those times. 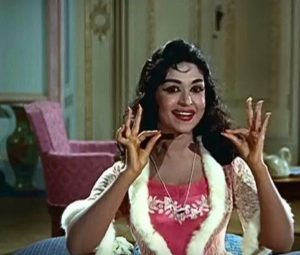 The focus was more on eyes, keeping the rest of the face muted.

Pale lip shadows like beige, baby pink, and peach were in vogue.

This theme was not the same in the 1970s, and you can see a minimal change in the makeup.

For instance – skinny eyebrows were preferred to bold eyebrows.

Over-lining lips were no more fashionable, as natural looking lips in muted shades were in vogue.

Retro style was the most influenced fashion as compared with salwar kameez in these times. 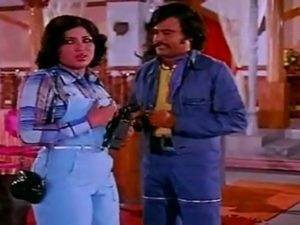 The hairstyles were not the same as high buns, and there were different styles like short hair, ironed hair, pony-tails, etc.,

Bright glossy lips and heavy pink blush were all the rage this period. 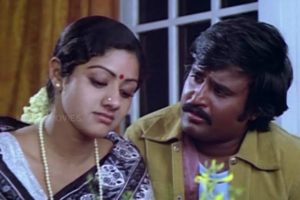 Sheer saree with close neck elbow sleeve blouse was the trend in the 80s, which is the trend even today, right?

Untamed brows, bright eyeshadow, and bright metallic lipstick were used in abundance. Dusky looks were the trending looks of this time. 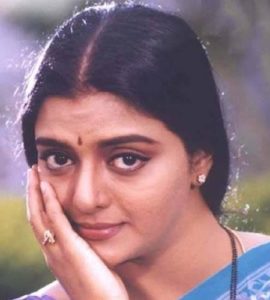 You can see more dusky skinned heroines in this period of an era in a large number.

It was the time when bell bottom pants and shirts came into the trend.

Most of the heroines are portrayed with less makeup and simple outfits onscreen.

Salwaar suits and gowns were the most preferred attire in these periods. The actresses like Nadhiya have given fashion goals like “Nadhiya hairstyles” “Nadhiya jewellery” in the 1980s.

The heroines in the 90s are the same in fashion as compared to previous eras. They all maintained a mattified skin texture with thick eyeliner and full-length brows.

Fluffy and wavy hair was in the vogue and over lining lips were a comeback in this period.

‘Fashion repeats itself’, so this was the period where chubby heroines were in the top.

The actress like Kushboo was one the trendsetter in the 90s with her classic western look with matching accessories.

The Late 90s was the time long sleeve salwars were a trending fashion style. Loose fitting Anarkali and straight cut salwars were in fashion in those times. Elbow sleeve blouses were back to trend again in the 90s period.

The new century has also brought new fashion trends in the industry. The early 2000s was the trend for two-tones glossy nude lips and frosty smokey eyeshadow.

No more high buns in this era! Straight free hair was the trend from then! 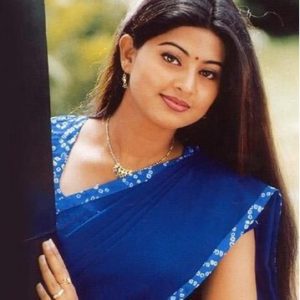 Thin brows and nude eyeliners were the most commonly used pattern. This was not the same in later 2000s.

Compared to western outfits, light shade sarees were the most desired clothing. Shalini’s ‘Alaipayuthey’ looks are still the most iconic ones until now. Do you agree? If so comment below.

The 2000s was the time when western dresses like t-shirts, mini skirts, and shirts came into fashion.

Jyothika was one such actress to cultivate new trends in fashion in that period. Now she gives us fashion goals with saree!!! 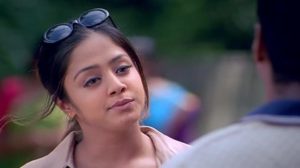 Sarees were also in equal trend in this period! Light shade sarees are the most preferred one! Later, in the middle of the decade, half sarees were trending, as Trisha’s ‘Ghilli’ and ‘Unakkum Enakkum’ attire was eye-catchy… 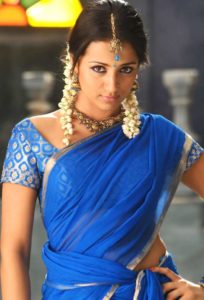 Even matching Kundan jewellery sets were in fashion after the movies.

Then came the old trend salwar suits but with minimal changes – like gathering pants and fitted top salwars.

Now, this era from 2010, the industry touches all the aspects of fashion from traditional silk sarees to trending modern outfits. 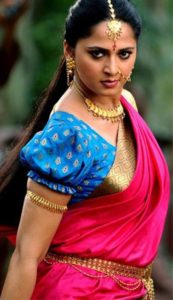 Let it be layered free hair or front puff one, the colored hair is the most trending style!

Designer Kurtis and palazzos are the trending outfits today! Trimmed brows and nude makeup that gives natural looks are most in fashion!

High buns came into trend after the recent look of Nayanthara in ‘Viswasam’. 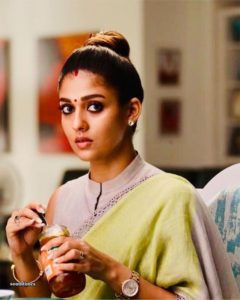 The fashion may change year after year, but the grace and beauty of our actresses remain the same for all ages.

Hope you all enjoyed watching this video. Comment on your favorite fashion era in the comment box, or share your suggestions with us if we have missed any.